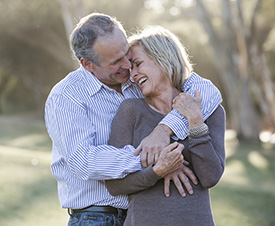 With the discovery and applied use of isolated hormones in the 1960’s, it wasn’t until the early 2000’s did hormone replacement therapy (HRT) really take off. A deficiency in hormone levels has been credited with contributing to illnesses such as menopause, hot flashes, perimenopause, and several other conditions.  However, with the discovery of bioidentical hormones, there has been debate as to which is safer and more effective—synthetic or bioidentical hormones.

What’s the Difference between Synthetic and Bioidentical?

Hormones and other bodily chemicals work like a lock and key. A molecule with a unique structure (the “key”) is sent to a receptor (the “lock”), if they fit, a further chemical process takes place resulting in body functions. If you’ve ever accidentally used the wrong key in a lock, you know all too well that the lock won’t function, the key may get stuck, or ultimately the lock may break. If a chemical in the body doesn’t exactly fit a receptor, issues may arise.

Bioidentical hormones aim to get around the problem of mismatched hormones by starting with a natural hormone as a base, treating menopause, hot flashes and a myriad of other conditions more efficiently.

What are Natural Hormones?

Despite the term “natural,” both synthetic and bioidentical hormones are modified or manufactured in a lab, leading many to feel mislead by the term “natural” with bioidentical hormones. However, hormonal imbalances result from very minute changes in hormone levels. It wouldn’t make sense then to simply pick up a yam (one of the major sources of natural estrogen called phytoestrogen found in bioidentical hormones), eat it and expect to be cured. Dosage matters and having the ability to extract a hormone, measure a set amount, and accurately supplement your hormonal deficiencies is essential. This extraction, measurement and packaging can only be performed in a safe, clean lab.

Synthetic hormones, on the other hand, are not derived from anything naturally occurring. They are made entirely in a lab. The problem with making something as complex as a hormone in a lab is that it can never match the complexity of a natural hormone. Look at it this way, hormones have conversations with cells, “telling them” to act a certain way. With synthetic hormones, it’d be like trying to carry on a conversation with Siri from your phone, some things are going to be lost in translation even though it was created by humans. A bioidentical hormone however, is like having a conversation with another human.

In a series of studies conducted in 2002, the differences between synthetic and bioidentical hormone replacement therapy were identified, not in their intended function, but their side effects.  Taking a natural form of progesterone and comparing it against a synthetic form, researchers saw that the synthetic form posed a much greater risk to the health of patients.

One of the main side effects of the synthetic progestins (a synthetic progesterone compound) was an increased risk of developing Breast cancer. Synthetic forms have the potential to incite and increase estrogen related breast cell mitosis, this is to say the division and spreading of cells. This out of control cellular division is known as cancer. Synthetic hormones have also been shown to convert endogenous estrogens into stronger variants (16-hydroxyestrone). These stronger, even toxic versions of estrogen can stimulate cancer formation.

If you’re looking for a solution to help control menopause, low libido, depression, fatigue, and many more conditions, hormone therapy with bioidentical hormones could be for you.  Request more information about the difference between bioidentical and synthetic hormones and hormone replacement therapy today. Call (870) 642-8818 or contact us online.